There was a time when Fireforce Ventures might have just shut down when reputations and careers were dragged through the mud. It was our darkest hour.

That's when people like Nick showed up. He was one of many Rhodesians who backed us up in our hour of need. He became a friend to a bunch of military history nerds on the other side of the globe who were under attack from Antifa-affiliated journalists.

As labour unions, army officers, and law firms threw in the towel in our fight to preserve professional reputations, Nick stepped up. He gave us a deeper appreciation of Southern African history and told us how we'd fight back.

Nick was tenacious to that end. He gave us critical marketing advice, business suggestions and wrote some powerful letters of recommendation to repair our reputation. Most importantly, he connected us with many black African veterans in Zimbabwe and South Africa. It was their stories and lived experiences that gave us the motivation to double down on our efforts. The connections with these old Masodja and their families are something we cherish and continue to build upon.

It wasn't always easy given the cultural gaps between a baby-boomer Rhodesian War vet and some Canadian millennials, but Nick never gave up on us. We were planning to thank Nick in person, but sadly COVID-19 threw a wrench in our travel plans to Africa. Though we never met in person, we can't thank him enough. Nick passed away 20 May 2020 after a valiant battle against some health problems. He was 61 years old.

In life, Nick was a daring bugger and sometimes even divisive among his fellow Rhodesians. Even though he was a tough nut, we're extremely glad he was on our side. 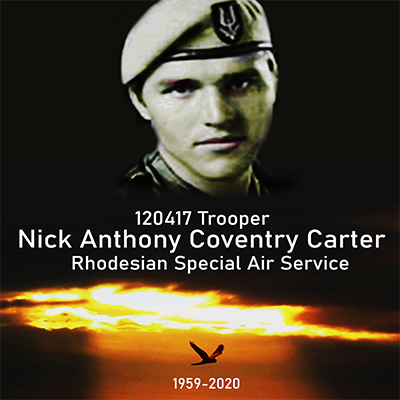